A favorite ad from the early 1980s epitomizes the significance of cassette tapes during that time. The visual depiction of loud music is clever and humorous: the audio playing from the tape is so clean and powerful that it blows the listener away. The tilt of the lampshades, the hair and tie flying back, and the hands tightly gripping the chair all convey the impact of the music. Advertising agency Scali McCabe and Sloves created the ad for Maxell in 1980. (Credit goes to photographer, Steve Steigman, art director Lars Anderson and copywriter Peter Levathes.) 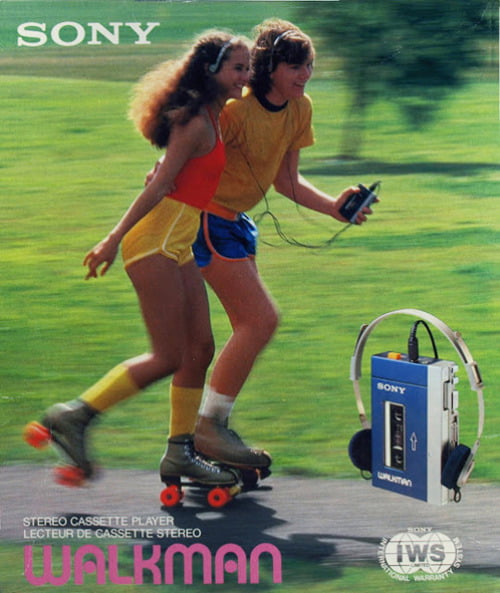 In the early 1980s, cassette tapes reigned supreme. It became the main media on which music albums were released. Sony helped ensure its adoption by the average music fan when it created the Walkman, the world’s first personal music device. Pop in a cassette and music followed the owner wherever they went. Cassette tape recorders had been around since the 1970s. But innovations in the 1980s included a dual cassette tape player that allowed the user to replicate a high fidelity recording to a blank cassette, making it practically indistinguishable to the original. This provided the perfect vehicle to create a mix tape. To share some favorite songs with another person, music lovers would take a blank tape and record on it one song at at time in real time, meaning 30 minutes of music took 30 minutes to record. It was a great way to hear new music, especially things that were not played on the radio. It was also became a great way to connect with a friend or impress someone you hoped would love not only your music, but you.

The world has come full circle: the cassette tape is enjoying a resurgence of late and blowing a new generation of listeners away.

Side notes: I remember seeing the ad in magazines in the 1980s. I loved the ad because of the clever visual depiction of loud music. I’m currently working on a poster that is based on mix tapes. Check back later this year for updates on my progress.
On a personal note, the Walkman sure made mowing the lawn (which took an hour) much more enjoyable. However, I didn’t have a Walkman, I had a Fisher cassette player

Posted in advertising | No Comments »